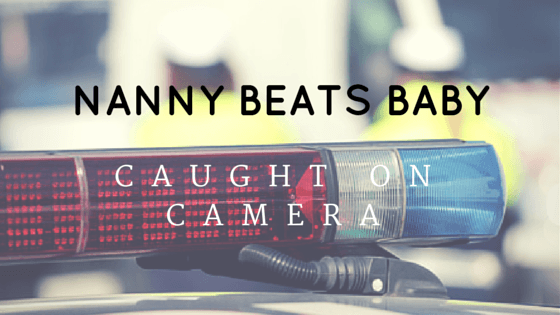 This must be one of the worst subjects to think about, but when you see the headlines “nanny beats baby caught on camera” in the news, it definitely catches your attention.

None of us want to even consider for one moment that the person we entrust with the care of our children could or would abuse that trust. Unfortunately, this is not true and there have numerous cases where such a horrific event has actually happened.

At the end of this article I have listed four such cases in the past year or so, cases that have hit the news. All of the four links open into a news page, three of them with an embedded video, two of which – show you the child abuse caught on video.

So be warned that these videos are graphic and are very disturbing – so skip them if you don’t want to watch them.

The point I am making here and why I am writing this article is because so many of us leave our children with nannies or babysitters during the day, while we are at work. Money is always tight and more often than not, both parents need to work to pay the bills.

So it is a fairly normal routine in many families – that mom and dad go out to work and a nanny or even a family member comes in and looks after the children.

This is such a scary and horrifying scenario, when someone you entrust your children’s welfare to, actually abuses your children. In most cases however, there are no problems and the care giver is absolutely wonderful with the children.

It is when those few cases are brought to light in the media that we realise the risks we are really taking with our children and the ramifications of these risks, chill us to the bone.

WIFI Nanny cams give you peace of mind

Most nannies are completely professional and dedicated to their work. However, when you have to leave your baby or children in the care of another person, you need to be 100% certain that your child is being treated appropriately and is always safe and protected.

Even though we all have expectations of honesty and integrity in care givers, safety is always the most important concern for parents. So if you have to employ a nanny or even a family member to care for your baby when you are at work, a WIFI nanny cam is a purchase that you will never regret.

You can read my nanny cam reviews here.

News24 reported such a case in November of 2014, where in Uganda a nanny was exposed abusing a child – you can read the news report on News24 and watch the embedded video there as well, but be warned because it is very graphic and disturbing to watch.

The toddler’s father had installed the nanny cam after he noticed that his young daughter was more subdued than usual and had unexplained bruises on her skin. The nanny was later jailed for 4 years and the abuse has provoked a widespread debate concerning childcare in Uganda.

In March of 2015, Yahoo News reported another case of a nanny beating a baby in California. The tape shows the nanny hitting a toddler while he is sitting in a high chair. His mother had installed the nanny cam after she had found bruises on her son, but didn’t expect to see the type of violence caught on her camera.

You can read the news report and watch the video below – but again it is very graphic and disturbing to watch.

In December of 2014, a German nanny was arrested for abusing a toddler in Sherborn, Massachusetts. The father of two boys installed the nanny cameras in his home, because his children had been “acting up” and he wondered if there was a problem with the nanny.

Unfortunately his concerns proved correct when the videos revealed the nanny physically abusing his 3 year old son. The nanny was arrested.

You can read the news report here.

In 2013, a young couple in South Carolina became suspicious of their nanny when they noticed that their very friendly and unassuming dog had become quite aggressive towards her. They secretly placed an iPhone under the couch when they left for work and were horrified to learn that their nanny was verbally and physically abusing their 7 month old son all day long.

The nanny has been jailed for 1 to 3 years for her crime and they are very thankful that their dog was so perceptive. You can watch an interview with the parents which was embedded in Foxnews.com below, but be warned that the topic is very disturbing.

Fox News – interview with parents of baby abused by nanny