With HD 1080p resolution, this hidden camera charger adapter by FREDI gives you live streaming color videos with audio, and supports a 128 GB SD card for up to 24 hours worth of recordings.

The field of view is only 45 degrees and you might be hard pressed to find a wall socket high enough up the wall to give you a good view, but nevertheless, online reviews are very positive. 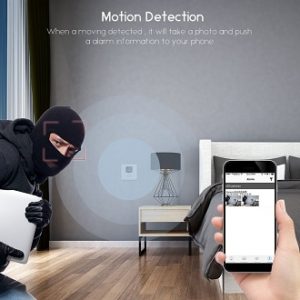 If you are in the market for a hidden camera, then this model by Fredi might suit your needs.

Since this pinhole camera is an actual working charger adapter (it charges iPhones and Android phones) it won’t look out of place in any of your rooms at home, from the nursery to the kitchen or the family rooms, even the garage.

It also won’t look out of place at your business or place of work if you suspect someone of doing the wrong thing at work.

You might be surprised at the quality of the videos from such a small hidden camera, but with 1080p resolution it gives you good quality color videos with sound as well (you can turn off the audio function on the app). Motion detection is another great feature, sending alerts to your phone when motion is detected. 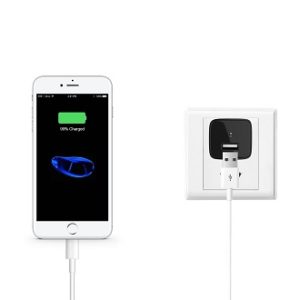 Set up is pretty easy, all you need to do is to download the app onto your smart phone, scan the QR code into your phone and follow the prompts.

Negatives are that it doesn’t have night time vision, so it is only good during the day, and the instructions are not very clear or understandable. Having said that – it is fairly basic and all of the features can be altered using the app. 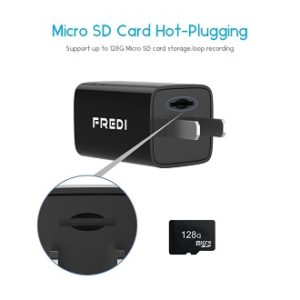 There are not a huge number of online reviews for this hidden camera charger adapter, but those that are available are pretty positive.

A few customers have found  problems making a WiFi connection, but customer support always responds asking the customer to contact them for support.

Otherwise, most customers like how this spy cam doesn’t attract any attention and that it starts recording as soon as it is plugged into the power socket.

If you want a hidden camera, then this model by Fredi, which is an actual wall charger might be suitable for your needs. It simply plugs into a wall socket and no-one will know that it is really a pinhole camera recording both sound and motion in real-time.

You can watch what is going on using live streaming on your smartphone or view the recordings later by accessing the SD card. It does have a narrow field of view (45 degrees) and will need to be positioned well enough to see what is going on in the room (this depends on the position of your wall sockets).

Despite these limitations, the majority of customers really like this hidden camera adapter charger and it is selling pretty well on Amazon at the moment for less than $50.